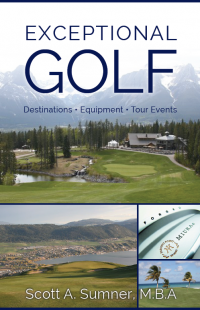 My interest in golf began later in life than many today. In the summer of 1975 I went home for the summer from university to the small mining community in Northwestern Ontario Canada where I grew up. My father, a mining engineer and a friend of his who ran a forestry company were both avid golfers and decided to build a golf course in the town. That summer 5 holes were completed and the next year the remaining 4 built. It was here that I began my lifelong interest in golf.

As my career path ended up in media I started a golf publication in 1996 and then a golf web site in 2004. This has allowed for a great involvement in the sport by travelling the world to see and play some of the great golf courses from Hawaii to Dubai. I have been able to cover some tremendous golf tournaments on the PGA Tour as an accredited member of the media including Canadian Open’s, US Open’s or the Presidents Cup. The change in technology of the equipment used in the game has created some topics to discuss. Also the ability to take some fantastic golf lessons from some of the best instructors and their academys in the world has been a very interesting experience.

In Exceptional Golf: Destinations, Equipment, Tour Events we will feature spectacular golf destinations in Ireland, Sweden, Dubai, Hawaii,United States: California, Alabama, Mississippi, Florida, West Virginia, Georgia, North Carolina, South Carolina, Michigan, Minnesota, Pennsylvania and Canada: Prince edward Island, Quebec, Ontario, Alberta and British Columbia. We will talk about equipment advances as seen at the annual PGA Merchandise Show in Orlando, the PIng National Fitting Centre in Oakville or with golf short game guru Dave Pelz. In tour events we describe being at the 200o Canadian Open at Glen Abbey and witnessing the famed 6 iron shot by Tiger Woods on the 18th to win or the singles match between Tiger Woods and Mike Weir at the 2007 Presidents Cup in Montreal. We will also talk about my experiences at the David Leadbetter Academy, Whistler BC, the Jim McLean Golf School at Niagra Falls , Ontario or the Titleist Performance Institute, Savvanah, Georgia,

The beauty of golf is you can play it for a life time and I intend to do just that! I?hope you will enjoy my golf experiences and they will enhance your own journey in the game we love.